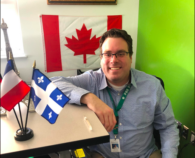 Andrew Klay is a new French teacher at Provo High. He came to us mid-year, and we are très content to have him here!

Andrew was born and raised in San Diego, California, so naturally he loves the beach… but he adores winter and snow as well! He learned French in Québec, Canada, and has been speaking and applying it extensively for 13 years.

His professional French experience includes tutoring, translation, voiceover narration, and weekly conference interpretation. He comes to us most recently from Edgemont Elementary School, where he worked for a year and a half in their French Dual Immersion program.

Andrew enjoys playing the piano and composing, collecting French Disney and other popular songs, skiing, biking, and stand-up comedy. He also speaks Spanish and is enjoying connecting with his students as they all grow together in their love of languages.